Breaking news: Report of an armed gunman on campus puts SJCC on lockdown 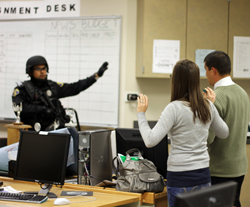 San Jose City College is on lockdown after reports of a gunman on campus.

The announcement was made on the Emergency Alert System  at approximately
5:05 p.m.

The instructions were for all students, faculty and staff to remain inside classrooms, turn  off lights and stay quiet.

Within the hour, a San Jose Police Department helicopter was dispatched and the SJPD Swat Team was on the SJCC campus.

SJPD officers and  a S.W.A.T. team were visible outside the Technology Center at Bascom Avenue and Moorpark Avenue with their weapons drawn. The police closed Moorpark Avenue.

The gunman was reported to be on the third floor of the Technology Center, where spotlights periodically entered the windows as the police continued their search for the suspect.

There are no reports of shots fired.

A district email sent at 8:12 p.m. gave the “all clear” at San Jose City College after no gunman was found.

The campus had been on lockdown following reports that a gunman was seen near the Student Center and later in the Technology Center on the opposite end of the campus.

The teams entered the newsroom with guns drawn and ordered the Times staff and their adviser to stand still and raise their hands.

The police searched some students and let some leave the classroom without a “pat down.”

City College Times Adviser Farideh Dada, who wears a Muslim head scarf, or Hijab, was searched multiple times in front of her students.

Students and faculty were led into the third-floor hallway and escorted out of the building after a head count.

Police suspect the call was a hoax or the 911 caller was mistaken.

Classes were cancelled for the rest of the evening, but finals week will continue as usual Wednesday morning.