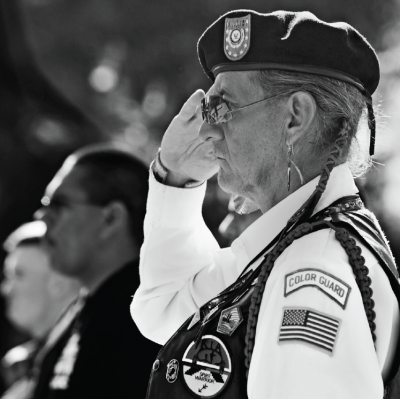 Steve Hill
The Veterans Celebration Day and Resource Fair was held at the Student Center quad area Nov. 2. “We are honoring and celebrating our veterans here at SJCC one week before the national holiday, which can be emotional time for the vets,” counselor Gary Ledesme said.

This event was a chance for veterans on campus to connect with organizations that provide services for them, and it drew a crowd of roughly 150 students and staff.

“Veterans experience all types of issues like post-traumatic stress syndrome, employment issues, family issues. This event brings a lot of resources (to the campus) … for students to take advantage of,” counselor Lila Chiem said.

The Department of Veteran Affairs for San Jose and Oakland, university veteran affairs offices from DeVry, UC Santa Cruz, CSU East Bay and Golden Gate University, Goodwill and Killed In Action (KIA): American Remembers were some of the groups who participated in the event. There was also a Mobile Vet Center.

“It’s hard to reserve that (the Mobile Vet Center),” Chiem said. “We’re so happy that they are able to be here. They are really a great resource for our vet students.”

As an army veteran and former SJCC student, Fiddler has a history with the campus and he said he was glad there was a resource event geared toward veterans who are attending SJCC.

There are about 250 students who are veterans on campus. Ledesme predicts that number will increase.

“Those who are returning from Iraq at the end of the year, I think it (the number of students) is going to increase to more than 300,” Ledesme said.

He also said that the immediate goal of the campus veterans office is to start a resource office, a dedicated website for veterans, as well as a club so that they can create their own goals and activities that will benefit the students here.

Scott Henderson, who served in the army from 1988 to 2003, an SJCC student and assistant football coach for linebackers, said he would like to see campus veterans program goals reached.

“I’d like to see all the veterans get involved in this club,” Henderson said. “Eventually, I’d like to have the veterans room, kind of like a USO (United Service Organization) that’s specifically for veterans.”

According to the American Foundation for Suicide Prevention website, 20 percent, or 6,900, of all suicides in the United States occur among veterans. Fiddler thinks those numbers could be lower with improved access to programs like the Ethnic/Cultural Commission Advisory Committee.

The ECCAC helps veterans and their families deal with that (mental health issues),” Fiddler said.

Referring to a recent military suicide, Fiddler said this veteran might have pulled through if he had access to help.

“Had he had a little more counseling,” Fiddler said, “a reason to think it wouldn’t last forever, we could have helped him.”