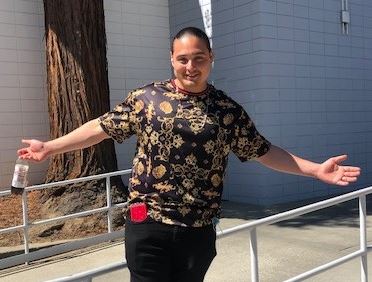 SJCC student Turlock Diaz grew up in a single-parent household, moving from house to house. It was just him and his mom.

He had no siblings and said he felt something was missing so he looked to the streets.

“We grew up in a struggle. She worked a lot, and she was around but like a lot of families struggled. A mom can only do so much, especially raising a boy, they can only teach them so much,” Diaz said. “I didn’t grow up with a dad because he was never around. She tried her best, but I looked for dad figures on the street, and I learned how to become a man in the streets.”

Diaz said he started to spend time with people who were older while he was only 11 years old. He said the others never knew he was so young.

“Growing up in the streets, I looked to the streets for brothers since I didn’t grow up with any. You turn to the streets because they have your back and I have their back because they were your older brothers and family,” Diaz said. “Around the age of 11, I started getting into trouble and started ditching school, doing drugs while I stayed up in Redding, California.”

At the age of 14 years old, he committed murder, which he regretted, and was sent to jail.

“I ended up murdering someone, and ended up going to juvy (juvenile hall). I got tried as an adult and skipped the whole process of juvy.”

“It wasn’t right because that’s another life I took, and I affected someone’s family. Not only that, but I also affected my family over something that was nonsense,” Diaz said. “I missed 12 years of life and missed my teens and school years over an accident.”

Diaz said he thought his life was over at the time and he would never see his mom again.

“I was thinking about my mom while I was in jail because all I had was my mom. I thought I was never going to see her again, and she’s going to be alone until she’s gone,” Diaz said. “I had to focus on what was happening there. You can’t control what’s outside of those walls, but I was able to adapt to it and kept my head up. “I just kept praying that God would protect my mother while I was in jail.”

The biggest lesson Diaz said he learned from this is the importance of thinking twice about your actions.

“Never act impulsively because you have control of what you do and think about your family and others before you react to something,” Diaz said.

Diaz’s luck changed when the new law, SB260, took effect in 2014. Diaz said he felt like he had hope for his future.

SB260 is also known as the Youthful Offender Parole Bill. The law was a plan by state legislators to reduce the number of youth in jail in California’s prison system and give a second chance to young offenders who were jailed after being tried as adults. Anyone who was a minor but tried as an adult could have their sentence reevaluated and could be eligible for early release.

“When SB260 came out, I felt like it was the first little glimpse of hope. When I read the law, I saw that people from the age of 15 to 18, if they had a sentence over 25 years or more (could be released early),” Diaz said. “They had to go to the parole board. The parole board was not fair and is really biased against you, but it all worked out.”

On the date of his release from jail, Diaz said he would attempt to make up for lost time and reintegrate into society.

“I wasn’t anti-social because some people are anti-social when they get out and don’t know how to get back into society. I did not have a problem interacting with people and this is what I felt I should be doing, like going to college and getting a job and doing things right,” Diaz said.
Diaz enrolled in San Jose City College and plans to graduate and get a job.

“I want to take care of my mom and become a better person in life since I got a second chance at it,” Diaz said.

SJCC student Ibrahim Alivov said Diaz is a nice person and he said he expects Diaz will make a better life for himself.

“He’s a cool guy to hang around. He always has positive vibes, and he always has a smile on his face,” Alivov said. “I feel that Turlock is making big changes as a person because he wants to be successful in the future.“

Diaz said he hoped to finish college and become a better person and be an inspiration to others to not give up in life. Diaz is also planning to write a book about his past life to share more about his childhood and to overcome adversity in life.

“Doing bad things in the street and getting into trouble, it takes a big incident to realize that you can lose everything and go to jail. I got lucky and was blessed. I knew once I got out I was gonna go to college and try new things like football,” Diaz said. “I got a second chance in life and I made this promise to my mom that I was going to make everything right. That’s what I’m doing today.”