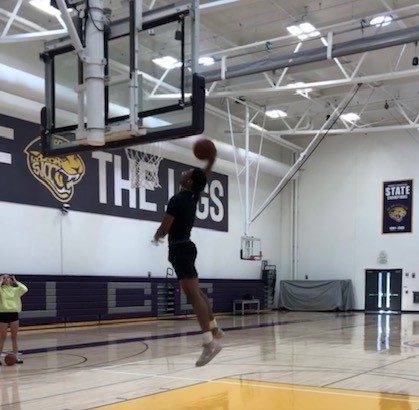 The San Jose City College basketball team had a successful 2021-2022 season, going 22-7 overall in the season and 8-4 in conference play.

SJCC sophomore Matt McAndrews said he has been training with the team to get better for this upcoming season.

“We’ve been working hard as a team getting to know each other again. It’s a lot of the same guys as last year, and we’re getting workouts together and staying together as a team,” McAndrews said.

McAndrews also spoke about his intentions for this upcoming season.

“My goal is to be a better shooter and be a threat from the outside but also from the inside,” McAndrews said.

McAndrews showed enthusiasm to do even better than last year as a team.

“I think we’re all locked in for another state run. Our goal is to get better as a team, better than we were last year and just go from there,” he said.

McAndrews said there is a lot of positive energy, and good vibes from everyone on the court as well as on the bench.

“I think we have a really tight and fun group, and I think it’s going to be fun to watch,” he said.

Jordan Gill, a sophomore on the team, also spoke about how their 22-7 season went and how they can improve their winning record this upcoming season .

Jordan Gill, a sophomore on the team said he feels the team did really well, with lots of ups and downs.

“I feel we should have finished a lot better. We should’ve won our last three games,” Gill said.
“Coming into this season, I feel we have a new level of focus where we are a lot more hungry. We understand it’s a small window opportunity and we have to see it.”

Gill said he is hopeful for the next season.

“We have a lot of high IQ guys that I’m looking forward to playing with and looking forward to playing through the whole game and getting a lot of shots up and scoring a lot of points,” Gill said. “Getting all conferences is my individual goal. I feel I can go bigger than all conferences, but I also want to take it step-by-step, getting all state would be awesome. Just shoot for the stars.”

Gill spoke on his new upcoming teammates and how they need to work hard to fit in.

Gill said the team’s goal is a state championship.

“We’re going to get there by trusting the system, paying attention to X’s and O’s, scouting reports, film and reps and committing yourself to the game,” Gill said.

“Last season for men’s basketball went really well,” Aye said. “We started hot and at one point we were 22-4; and unfortunately, we lost the last three games of the season. Looking back on it, guys getting hurt and COVID was a bit involved as well. But overall 22-7 was a good year, and we were right there when it came to the playoffs against a really good team.”

Aye, who started coaching the team in 2019, said COVID interrupted the team’s performance for two years, but he is hopeful for the next season.

“I’m really excited because I’m coaching guys that have been in the program for a few years because I came in 2019 when they were new and don’t get much time, then covid year, and this year was also interrupted with covid again so next season I believe is going to be the best year yet with all the key players returning,” Aye said.

Aye said he plans to make the team stand out in the area.

“I always want to get the local talent around the area, basketball wise,” Aye said. “We want to be the best program in the area, win a conference championship and have people talk about San Jose City being the place to be at. We also want to get every player a scholarship to a university, and so far every player has gotten a scholarship, especially our sophomores.”

Aye said the team looks to stride another great run and win a state championship.

“The massive goal is to make it to the state final 8 and have a chance to win the ultimate game, which is to win the state championship. But that’s a long way to go and awesome to strive for,” Aye said. “But most important is the players getting good grades and focusing on their academics and getting scholarships and hopefully win a conference championship and state which is very much within reach this year.”