Jaguars defeat the Panthers in a catfight 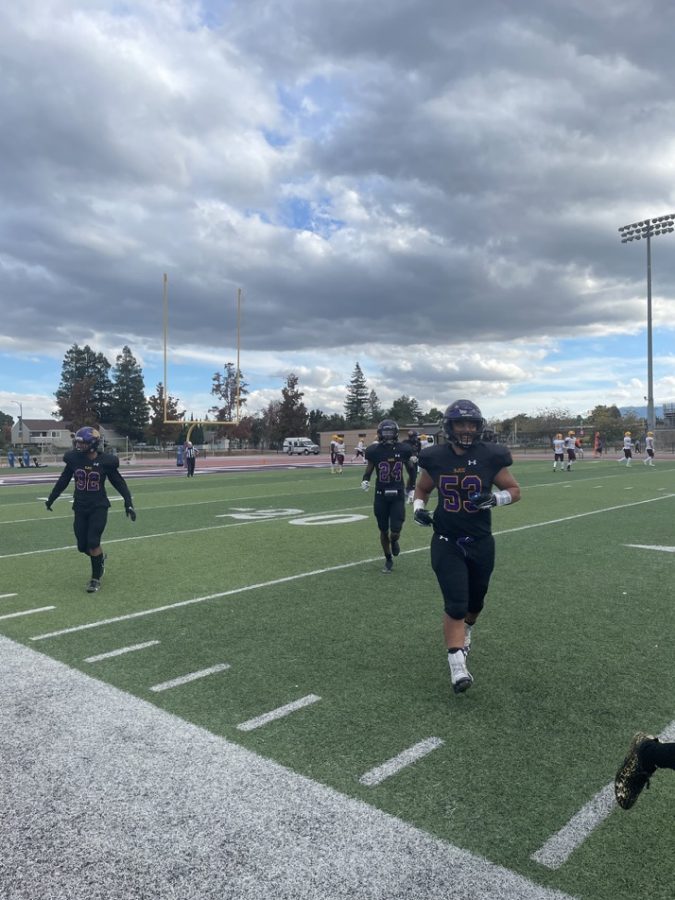 Linebacker Matt Putich, 53, comes off the field after a huge defensive play against Hartnell on Oct. 30 2021.

The San Jose City College Jaguars defeated the Panthers from Hartnell 44-38 in a closely contested overtime game on Oct. 30. True freshman quarterback Jared Julian ran in the winning touchdown from 25 yards out to end the game in overtime.

“The game was intense throughout all four quarters, both teams played really well. Jared Julian is a special guy … what he did in overtime was incredible, leading his team to victory,” voice of the Jaguars for KJCC Gabe Chavarro, said

In a matchup that saw questionable special teams play and inconsistent defense, the offense was on full display for both squads. At times it seemed like a heavyweight fight, with both teams throwing one haymaker after another.

“First home win in three years for the Jags,” Julian said, “that win was probably the best memory from this season.”

Coach Jim Winkler used the running game to keep the ball away from the high powered aerial attack by the Panthers. SJCC out rushed Hartnell in net yards by an astounding 184-29. Star running back Aslan Carvahlo finished with an even 100 yards and three touchdowns. The Jags almost had two players reach the century mark, with Julian adding 81 yards as well.

Former SJCC Jaguar standout, and current quarterback for Ottawa University Arizona, Michael Bird was in attendance to support his former teammates and coaches.

“…It’s a turning point in the whole coach Winkler tenure … As a confidence builder and recruiting tool,” said Bird.

Julian, out of Terra Nova High School, threw for 168 yards with three touchdowns and one interception. Wide receiver Darius Bedford was the recipient of one of those passes. On the other side, the quarterback for Hartnell, Juan Pablo Garcia, had an impressive 435 yards in the air but also threw a couple costly interceptions.

The Panthers threatened to break away a few times during the game but the vaunted Jaguar defense stepped up and made a number of impact plays that allowed the offense to get back on the field. Defensive backs, Tanner Jones and Jaqualyn Greene each came away with a pick. Greene added to the excitement returning his for 34 yards.

Not to be outdone, linebacker Villami Schaumkel recorded two sacks while defensive lineman Jonathan Johnson got in on the action with one strip sack in overtime that was recovered by DL Isaiah Regala. Other standout players included DL Karanjyot Sandhu and LB Chris Parungao both with huge tackles for loss at crucial moments in the game.

“The team was juiced. We needed that home win for morale in the locker room, lost a lot of close ones this year so that win felt good,” Julian said.

This was the Jaguars last home game of the season and as they prepare to face the Lobos from Monterey Peninsula College on Nov. 13. they will carry the momentum from this exhilarating win with them.

Julian said, “We’re looking forward to the MPC game and trying to keep some momentum and end this season on a high note.”