A new record of $1.6 trillion hits the government 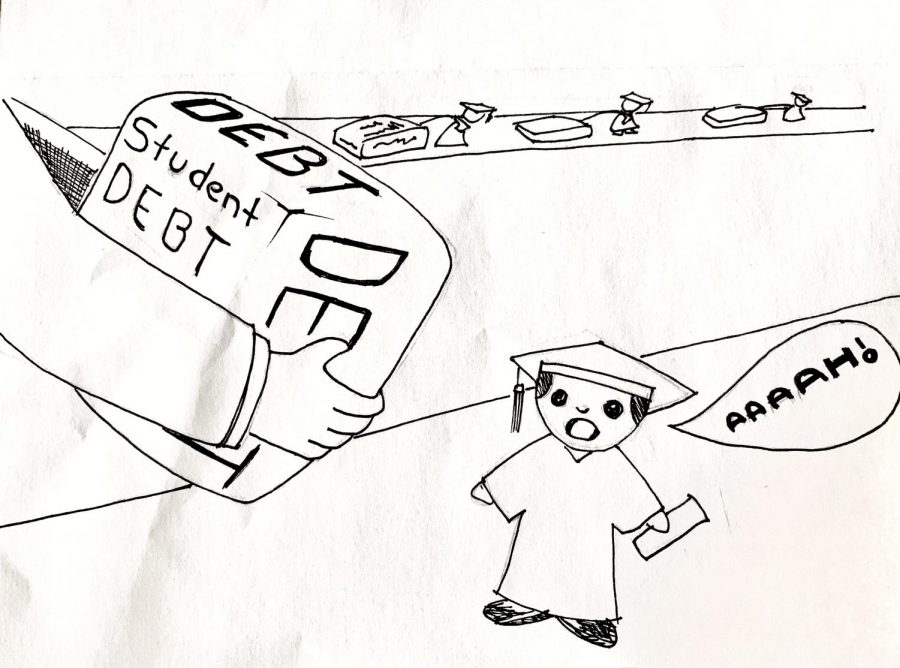 Students don't just graduate with a diploma but thousands of dollars in debt.

Student debt should be forgiven because it will help students focus more on getting their careers started in a challenging and competitive work field.

According to CBS news, nearly 45% of 2020 college graduates are still looking for jobs and COVID-19 has not made it any easier.

The average federal student loan debt is $36,510 per student and $54,921 in private student loans, according to Education Data organization.

Many people ask, “How will the $1.6 trillion get covered?”

Sen. Elizabeth Warren, when introducing the legislation to the Senate, said she would tax the wealthiest Americans when presenting the plan to cancel $50,000 in student loan debt. Sen. Bernie Sanders says he will create a “Wall Street speculation tax,” taxing stock, bond and derivative trades, according to NPR.

Money should come from taxing the rich. In the midst of the pandemic, the rich have gotten richer and the poor have gotten poorer.

In Picchis’s article he said that Chuck Collins, who is a researcher at the IPS’ Program on Inequality, said that a wealth tax would be good for the economy. He said that if last year the rich would have gotten taxed, $345 billion would have been a significant amount of money injected into the economy.

This wealth tax could raise up to $1.5 trillion in the next 10 years. This amount raised is close to the $1.6 trillion in student debt. According to Picchi’s article from CBS News.

According to Scholarship America Organization, students with outstanding loan payments are less likely to purchase a house, get a car loan, bad credit scores, and most likely will continue living with their parents.

Speaking about parents, sometimes they have to apply for federal parent loans on behalf of their student children.

According to Student Loan Hero Organization, 69% of the college class of 2019 had an average debt of $29,000. Students were not the only ones who took out loans but parents did as well. Fourteen percent of students’ parents took out an average of $37,000 in federal parent loans.

Students who have graduated have to settle for lower paying jobs because of the financial responsibility they have to pay their bills.

Think about graduating student debt free, how much easier would it be to face the challenging work field? Not having the urgency to get the first job that you are offered just because your first student loan bill is coming up.

Some may argue that there is financial aid assistance to help with student loans. Yes, there is. Low-income students face the greatest struggle. They not only face financial hardship but face personal problems at home such as unstable homes, living in low-income neighborhoods that have high crime rates.

Middle class students seem to have it a little easier or so it seems. Middle class students bear higher student loan debt after graduating. Their families make too much money to qualify for financial aid but don’t have the means to pay tuition out of pocket, according to Scholarship America. Thus, forcing them to apply for private federal loans.

Some may argue that they paid their student loans, why should students now receive a relief? Claiming that it is unfair.

David Goldstein in an article for Vox on Nov. 16 wrote that although he did pay off his student loans, he still supports student loan forgiveness. Goldstein explained the difference in tuition costs when he went to college in the early 1980’s.

He wrote that the average in-state tuition at a four-year public college or university was just $909 thirty years ago. Now the average tuition costs is $10,230 a year.

At the time, Goldstein wrote that minimum wage was $3.35 and he could have paid his entire freshman year tuition, plus fees, by just working a full-time job for about seven weeks.

Tuition has multiplied by more that 11 times since, but the minimum wage has only been raised to $7.25.

CNBC Make It wrote that in a survey conducted with 3,069 students, 39% of students who already have loans would consider dropping out of school in order to avoid accumulating more debt.

San Jose City College 2021 tuition fees are $1,362 for California residents and $9,118 for out-of-state students. Approximately 48% of enrolled students have received grants, scholarships as well as financial aid, according to https://www.collegetuitioncompare.com/edu/122746/san-jose-city-college/.

It also states that the average earning after 10 years of graduation is $37,600. Is that enough for the cost of living in the Bay Area?

Students shouldn’t have to worry about paying their student loan or their rent.

According to https://www.payscale.com/cost-of-living-calculator/California-San-Jose, San Jose’s cost of living is 49% higher than the national average. The cost of living in San Jose has been calculated to $50,000.

This student relief bill will help alleviate the burden for about 45 million students. Whether it be the $10,000 relief for students that President Biden endorsed while campaigning or $50,000 that Congress is trying to push him to pass, the mass relief that would spread across the country would be remarkable.

Students need this relief bill to be passed. Many students heard it promised by Biden and are still awaiting the fulfillment of it. Many are struggling, drowning in student debt.