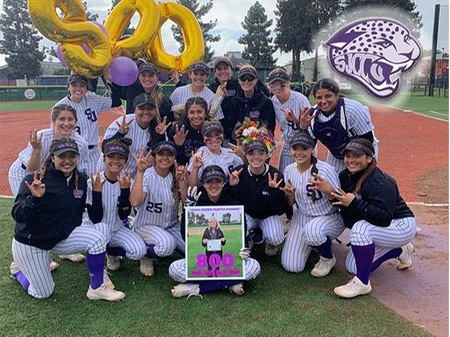 The Lady Jaguars finished the season with four wins and zero losses in conference play and 22 wins with one loss overall.
The team had tremendous success prior to the quarantine, ranking first overall in the South Coast Division.
With a winning streak of 20, the team has a record of 13-0 when at home and 8-1 when away. The lady jags had eight overall game shutouts, ranking third in the California Community College Athletic Association standings.
The softball team had a batting average of .359, an on-base average of .427 and a slugging average of .505.
The team is ranked in the top 10 in California in games, home runs, runs batted in, hits, runs and being at bat.
Within 23 games, the team managed to be at bat 626 times and have 174 runs with 225 hits. The team also combined for 37 doubles, 6 triples, 156 runs batted in and 14 home runs.

Freshman catcher Adriana Martinez led the San Jose City College team in hits and RBIs. During the season, she was at bat 67 times and managed to have 28 RBIs and 32 hits.
Sophomore second baseman and outfielder Zylee Augenstein, freshman third baseman Kyana Elder and Martinez led the team in homeruns with three each.
Pitchers Jessell Lewis, Madison Plazola and Victoria Latz combined for a total of 88 strikeouts with a batting average against the pitchers being .240. Alone, Lewis contributed to the most strikeouts in the season with 75.
In March, Lewis was recognized for her tremendous pitching statistics and was named the California Community College Fastpitch Coaches Association pitcher of the week.
“I was shocked when Coach (Debbie Huntze-Rooney) announced it,” said Lewis. “Knowing I was pitcher of the week in the state of California was crazy. It showed me that hard work pays off.”
Not only has the team achieved greatness but their head coach has, too.
Long-time SJCC softball Headcoach Rooney reached a milestone when she earned her 800th career victory.

In her 28 seasons as the softball head coach, she has guided the Lady Jaguars to 10 Coast Conference titles and 25 postseason appearances

“Being proud is an understatement. It couldn’t have happened to a better coach,” Augenstein said. “She’s third in active career wins in the state of California. If that doesn’t show how great she is, I don’t know what will.”

On March 19 the CCCAA Board of Directors voted unanimously that the remainder of the 2020 spring sports season will be canceled due to the outbreak of the coronavirus. Though the Lady Jaguars’ season was cut short, the team remains grateful for their success during the season.
“My team did amazing things this year,” Rooney said. “A 20-game win streak helped us finish at 22-1. I couldn’t be more proud of this team and what they have accomplished.”
Even though practices and games have been canceled, the Lady Jaguars still practice softball through online homework and continue to stay active through at-home workouts.