DOOM returns with a vengeance to blast the demons of hell

In this latest version of the popular video game, Doom Eternal is a fun way to pass time during the quarantine 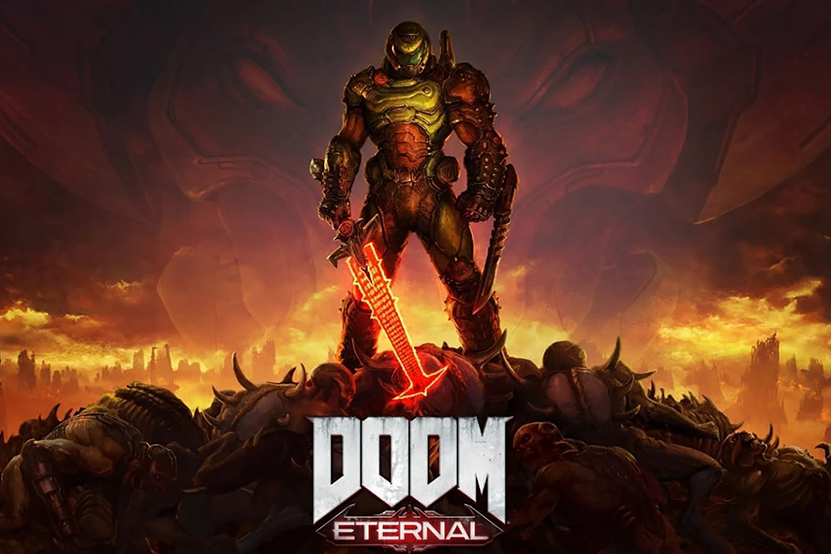 The Slayer blasts through assorted monsters in the latest iteration of the Doom franchise, "Doom Eternal."

“DOOM Eternal” is a fast-paced shooter game released March 20 in which the player must defeat hordes of demons in a post-apocalyptic Earth using heavy-duty artillery.

Do not play any video games — they are not worth your time. Read a book and challenge your mind instead.

If, however, you choose to disregard this information, here is what you need to know:

Set hundreds of years in the future, an alien race invades Earth to plunder humanity of its souls to use as fuel.

The protagonist, dubbed the Slayer, is a burly, nimble and mute super human with no understanding of fear or compassion; it is difficult to tell whether he is saving humanity or just obliterating demons for fun.

If the plot is important, it seems to matter little to the Slayer, as he shreds his enemies apart blindly, leaving nothing but dust in his wake.

At the start of the game, the player is introduced to the Slayer’s gun — and guns. It is clear that since the 2016 release of “DOOM,” he has not missed any chance to improve his physique.

Despite his hulking appearance, the Slayer is very agile, capable of making split second dodges to escape the smoldering hellfire of an enraged Imp or the voracious chomp of a Pain Elemental’s jaws.

Sounds mighty impressive, but the Slayer’s life actually hangs by a thread — everything is dependent on the player. Demons lurk behind every corner with the means and desire to mortally wound; their artificial intelligence has been carefully designed to force the player into one mode of thought: kill or die.

Every encounter can and will lead to death and frustration, which only enhances the feeling of accomplishment upon successfully clearing an infested area.

For role-playing-game fans like me, “DOOM Eternal” will be difficult. Players expecting the regular point, shoot, profit formula of other first-person-shooter games will need to adapt to the aggressive mindset very quickly.

I played on the easiest setting but still found it a challenge. The absence of an important overarching plot makes empathizing with the protagonist difficult.

The environments of the game are chaotic and overly colorful — as if the saturation lever was toyed with and broken. Many lights look like neon signs taken straight off the Las Vegas strip.

Textures may have improved since the 2016 release, but they were also given a cartoonish vibe. Perhaps the developers were aiming for a younger audience.

The demons, although exciting, have either too much color or have googly eyes. The Hell Knight, Zombie and Cacodemon are notable examples, all gaining eyes or an iris since the last release that detract from their otherwise ghoulish appearance.

The soundtrack is dynamic and adrenaline-pumping, reacting to the players actions. Imagine what a dubstep metal band from hell would sound like — that is exactly what you will hear. Regarding sound design, the howls, explosions, crunches and burps never cease to satisfy.

“DOOM Eternal” is a blast. Although it deviates from the previous games in terms of appearance; it is certainly a fun pastime, especially in this COVID-19 quarantine situation. It deserves a nine out of 10.