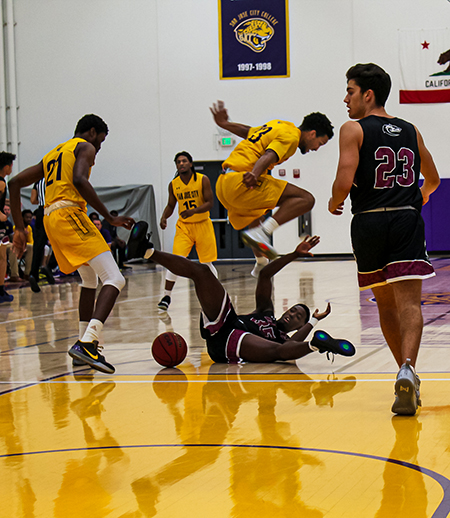 SJCC men's basketball player E. K. Okechukwu, No. 21, knocks down a Hartnell player at the Jaguar Sports Center on Feb. 8.

The San Jose City College Men’s basketball lost at home to Hartnell College, 61-59 on Feb. 12.
The Jaguar’s started off strong, leading their opponents 26-30 in the first period.
However, their luck started to fade when the Panthers began to pick up the pace. Hartnell soon found their rhythm and quickly took the lead.
Despite their loss, SJCC’s men held their ground.
Decaurey Brown played a total of 32 minutes, scoring 15 points. Brown’s game stats were 15 points, ten rebounds, six assists, and two steals (wow this guys a beast)
Ek Okechukwu played an admirable 21 minutes, scoring 11 points. Okechukwu had ten rebounds and two blocks to end the game.

Alkan Ozusug played 23 minutes, scoring nine points. Ozusug had three rebounds and one steal.
Bryan Nguyen came off the bench during the first half, scoring a total of seven points in 25 minutes. He also had four rebounds, one assist and four steals.
The Men’s Basketball team as a whole had a total of 45 rebounds and 9 assists\; however, the 18 turnovers may have very-well cost them the game.