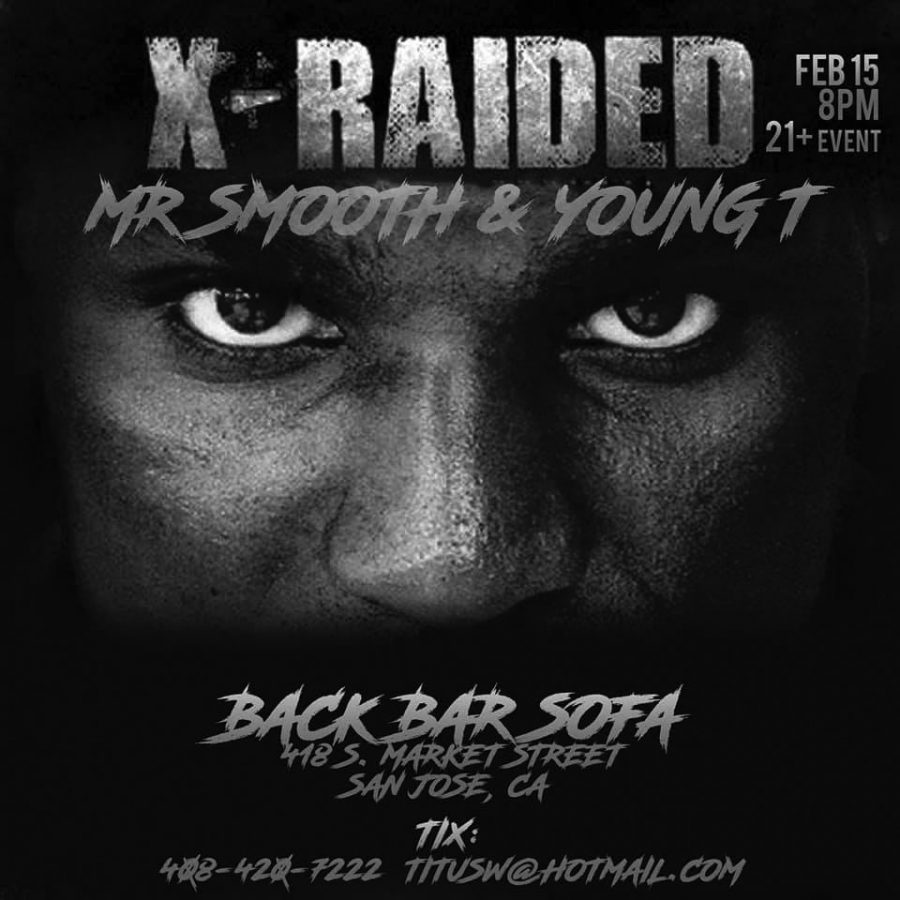 We Finna Get Litty, the San Jose, CA West Coast 420 Hip Hop duo is Mr. Smooth and Young T. Shawn Stewart (Mr. Smooth) and Titus Whitehead (Young T) opened a performance for Anerae VeShaughn AKA X-Raided Feb. 15th inside Back Bar Sofa located in city of San Jose, CA. “X-Raided is one of the best rappers of Sacramento, CA, West Coast rap, and the

X-Raided did release more than 20 albums straight out
of prison. VeShaughn was incarcerated for murder since 1992, but he managed to maintain his innocence throughout his incarceration. In 1992, X-Raided album “Psycho Active” was

used against him as proof that he committed the murder according to the media.

X-Raided was finally released in late September 2018.
Since then, X released a new song and video, and started planning, moving forward with a come back tour. According

to Nu.Ricks.com, organizer of X-Raided performing live, it was said that this is a once in a quarter century chance to see a legend of the rap game live!

Smooth and T have performed show to show and their first EP will drop April 20th. The duo promised a new EP release each year on April 20th as long as they are making music. Smooth and T are bringing back the old-school with their throwback style from early ‘90s hip hop. We Finna Get Litty is also available on social media and streaming platforms.

Mr. Smooth and Young T
are looking for artists/bands/ performers for the featured spots at their first Urban Vibe Open Mic located at the elegant pub. If you perform Hip Hop, Sing R&B or play it on an instrument or perform Reggae and want a featured spot, email Mr. Smooth at [email protected]

If you don’t have enough material to perform a featured slot come show what you do have or what new music you
are working on. Half of each show is designated for sign up performances on a first come first served basis.

“Be Blessed and One Love…. and let’s turn this into the Hottest Urban Vibe Open Mic in The Bay” said said We Finna Get Litty duo.