Topple the Mythology of Our Founding

Why we need to abolish Columbus Day 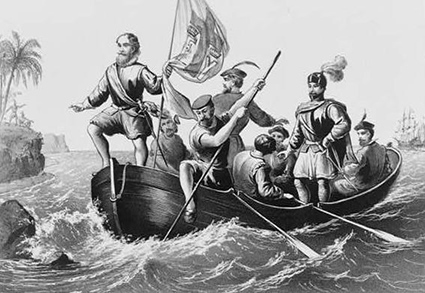 Columbus not discovering the "New" World.

The San Jose City Council voted to remove a statue of Christopher Columbus from City Hall despite the prominence of San Jose’s Italian community and its rich and enduring history in San Jose. Despite some controversy it was the right thing to do.

The moving of a statue however is not going to address the way Columbus‘s story has been used to glorify and legitimize an often brutal history of imperialism and colonization the European Continent (and afterward the United States) levied on the rest of the world to the present day.

The National Holiday known as Columbus Day is part of a tradition in American history where a palatable narrative replaces the truth to contribute to a mythology of the United States founding as being purely aligned with the principles of freedom and liberty. Pure alignment with the founding principles such as the Declaration of Independence has been the irresistible force providing the motive of American leadership to consistently create a false narrative and mythology to the founding of the United States.

Christopher Columbus, thought to be an Italian explorer, was neither the first to sail to the New World or to prove the world was round. At least it is acknowledged that his true intent was to find a passageway to India for trade purposes.

Commemorating a holiday in his name has been a symbol to legitimize the worthiness of his and others endeavors as it pertains to exploration of the New World. Romanticizing colonization and skimming over the hard truths of the clear crimes against humanity that took place throughout this period by those who wished to colonize.

The reality is modern day events that mirror colonization and Topple the Mythology of Our Founding European expansion in the New World would look much like the medieval demagoguery practiced by ISIS. The countless practices breaking modern day standards of conduct pertaining to war, human rights, and internationally recognized rule of law are indefensible.

One would think the country is at a level of maturity where we can acknowledge where we have failed to live up to standards that align with American values. Manifest Destiny, slavery, genocide, and the brutality of conflict in the nation’s earliest history all avoid the scrutiny it deserves. Even the use of nuclear power at the end of World War Two has remained legitimate as far as justification for its use.

America has done enough good deeds as far as the world is concerned to counter the mistakes of the past. Surely, a new history could be told that reminds the world of the many instances where America has stood for freedom and liberation from tyranny.

Apparently, humanitarian efforts do not seem to have the allure of winning wars, but many lives have been saved as a result of American will and generosity. From inventions improving quality of life to efforts fighting hunger and disease, America has a rich history to celebrate.

It is time to tell those stories and reconcile the mistakes of the past. We should demand this of our government and our Universities. History’s intellectual community needs to step up and forge a new path for future generations.

It should start with doing away with the holiday commemorating Columbus. It is inconceivable that we continue to propagate the myth that Columbus discovered America while it was already inhabited with indigenous peoples. That fact alone is an offense repeated every year it continues.

Let’s take a stand as a school of higher learning and lead efforts to prompt community colleges in California to advocate for the systemic removal of this holiday and start a campaign to make all textbooks of learning in the state accurate as far as Columbus and this whole era is concerned.

We must avoid the racial divisions this debate has caused and will cause and simply let the truth chart our course as we explore how to tell our history in a way that reflects the melting of our pot culturally in America.