I am: La frontera 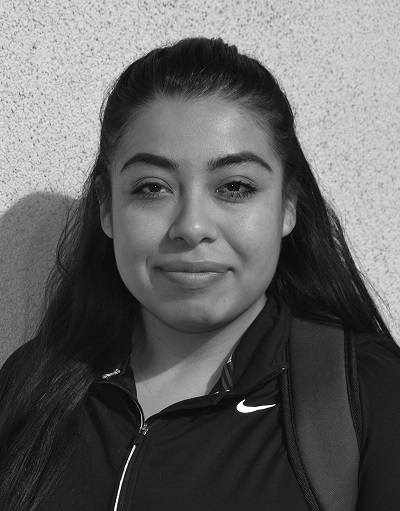 When she isn’t participating in protests, Valery Arzate is studying psychology.

I perfectly remember every detail of the night I crossed the border, even though I was five years old.

It was five in the morning when my middle sister woke me up and told me it was time to go; I had no idea what was going on, and I didn’t bother to ask. I remember that my older sister didn’t want to go, but she also didn’t want to make it harder for my mother. A few hours later, we were on our way to the airport. My mom never really told us much, just that it was time to see dad, and I was happy.

When we arrived at Tijuana, we stayed at a horrible low-class hotel. The room was so old and dirty. The bed had no base, so the mattress was on the floor; and the wallpaper was peeling. We waited two days, then , it was time to get closer to the border.

We met up with two guys who would help us cross the border; in Mexico, we call them “los coyotes.” My mom was nervous because she didn’t know them, and my sisters were terrified. We walked to a gas station near the motel, and an old rusty car picked us up. It took us to a shack near the border, where we waited for several hours until the sun went down. Then “los coyotes” took us to an abandoned mobile home — if I said the motel was the most horrible place I have even been to, I lied. It was cold and foggy, and it was hard to see if the border patrols were around. But the coyotes knew what they were doing; we had no choice but to trust them.

Suddenly, a black shadow appeared in the fog. Everyone was in shock; nobody moved at all. I felt like a statue. The man who had appeared came toward us silently; he began talking to the coyote, but it was impossible to hear them. In that moment, my mom hugged me and my sisters and told us to pretend we were deaf; until this day I still don’t know why, and I don’t want to ask.

The stranger took our backpacks with all our stuff, even my little pink shoes sent by my dad from America. The coyote explained that the man would have called the border patrol, so we had no other option. I was glad that my mom placed all our money in her sock.

Several hours passed, and one of the coyotes came running, breathing so heavily that he could hardly talk. He told the other coyote that the border patrol had left, so that meant it was time to run, and we did. I was five years old and wasn’t fast enough to keep up with them, so one of the coyotes had to carry me across a small river.

We came to a high fence with a hole in the corner that we had to climb through to meet up with coyotes on the American side. My mom passed first, then my sisters, then it was my turn. When I crossed the border, my mom and sisters were gone. I was nervous and scared, but I knew I couldn’t cry.

A coyote who I hadn’t seen before took me inside a car and drove away. I was in shock. I really thought I would never see my mother again. But the coyote stopped the car, made a phone call, and he said: “Here, it’s your mother.”

My mom answered, crying asking me if I was out of danger. I wish I could have told her to stop crying and to calm down, but I didn’t have the words.

We arrived to the hotel, and when I saw my sisters and my mother, I felt relieved. We were all safe.

The next day, the coyote spoke the words that gave my mother a small, soft smile. She turned around and told us it was finally time to see dad. Somebody knocked on the hotel door, the coyotes opened the door without any hesitation. It was my dad. My sisters and I ran to him and hugged him. I couldn’t believe I had my family all together again.

I have experienced a lot of struggles in my life, but it can’t be compared to the day I crossed the border.

This is unacceptable! I can’t believe people who want to improve their lives have to go through all of this, while some people that have the chance and the benefits to have a good life take it for granted. I don’t think wanting a better life is illegal. We don’t come to steal jobs, we don’t come to make problems; all we have is hope and the desire to work hard. Since I was 13, my sisters and I have protested in the Bay Area, and I constantly talk to my peers about immigration reform. But years have passed by, and my frustration increases; all we want is to feel free in this “free country.”

I recently asked my father to tell me why he brought us to this country. I hoped he didn’t have a good reason, so I could argue with him over how “our president” took DACA away. Fortunately he did have two very good reasons. One was that he wanted his family together and safe. We weren’t safe back in Mexico, he explained. A Mexican cartel was looking for us because when my dad was a Marine, he arrested one of the drug dealers from the cartel.

The second reason was that he knew that my sisters and I would be able to continue with our education and to build careers. Back home in Mexico, many young women don’t complete an education; they have to dropout of school to work. The life of an immigrant is hard, but we are all still here working hard for our goals. It’s not about the “American Dream” — we don’t dream about a good life; we take actions and risks to make a better life in this country.

I don’t know how many people cross the border each year, or the many ways they cross it. But I have heard many stories of people getting killed or raped during the process. We were lucky crossing the border.

I will always be thankful for the decision my parents made to come to the United States. Coming to this country absolutely did change my life, and it’s changing my future.

However, my parents brought us to this country knowing we would need to hide all the time to not get deported, but they didn’t know they would have to watch out for people wanting to make life impossible for us as immigrants.

I still ask myself if I would be safer in any other place in the world, and if I could, I would definitely move there because I would love to have peace around me. This country is always at war with other different countries, but it seems like now this country is at war with itself.

“I am…” is a special series in which we asked students to bring new insight into social issues through the lens of identity and their life experiences, and to answer the ultimate question: Who are you?

To read all other articles in this series, click here.