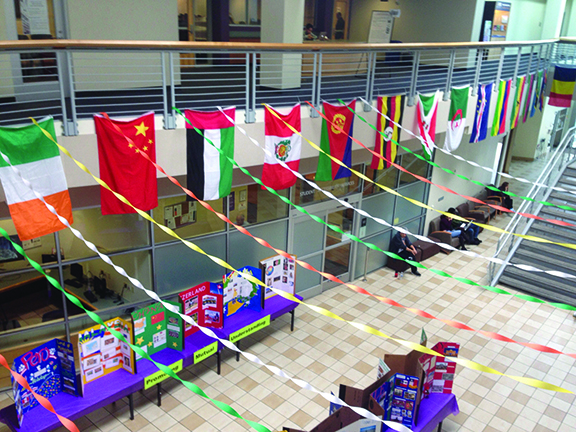 The theme for International Education Week was a relatively timely one said Brandon Yanari, the International Student Program specialist.

“Promoting mutual understanding. It’s an especially important topic during some rather trying times for many populations,” said Yanari.

On Monday, a world language mixer took place, along with a cross-cultural session and movie night Tuesday. Wednesday focused on relocation of urban American Indians and included an employee potluck. Thursday wrapped up the event with desserts and a cultural dance performance.

“We tried to gather a wide range of countries, and are always looking for better representation from different cultures,” Yanari said. “Students got the opportunity to learn different languages right from the start of the week Monday, and it culminated Thursday with a presentation of Japanese and Russian-influenced cultural dances.”

Elena Dutra, an SJCC counselor, gave a presentation on the Urban American Indian Relocation Act Thursday to inform and advocate curiosity toward phases in Native American history and the experiences groups faced.

“Often Native American culture is overlooked and facts are mistaken,” Elena said.  “Ask us Native American about who we are, we’d love to explain about our tribes and culture. Of course, we can only speak from our own perspectives and experiences not for others or at a mass level.”

IEW also served as an opportunity for students at SJCC who are interested in studying abroad to gain knowledge and gather information. The programs during IEW included a section dedicated to studying abroad.

“Although there is not yet a study abroad program at SJCC, there were individuals who provided information for those looking to learn in another country,” Yanari said. “Students that are interested in certain countries can meet with those from that country and ask questions about what to expect if traveling.”

“The information presented was very interesting to know considering the history of the native citizens of this land,” said Alex Sanchez, 23, a communications major. “Based on my experiences there are definitely misconceptions of facts, but events like these help make it less likely.”